What Brought You To This Moment?

If you haven't heard last week's episode, What Is Your Present Reality?, go ahead and check that out first. Now that you're clear on what's happening now, we're going to ask the question, what brought you to this moment? Think about the experiences you've had, the changes you've made, the things you've done....all of these things have led you to this very moment, who you are right now. This episode will be an opportunity for you travel down memory lane, so you'll definitely need your favorite pen and journal.

Mentioned In This Episode

Join us for a FREE workshop! What's Next? The Myth of Certainty (and what to seek instead) Click here to RSVP!

Welcome back to Inner Warmup where your inner work begins. My name is Taylor Elyse Morrison, host of this podcast and creator of Inner Workout and you as always are our expert guest. Thanks for being here today. Right from the top, I want to let you know that if you haven't listened to the previous episode, talking about your present reality, go ahead and press pause here. Click on that episode number 69, “what is your present reality?” and then come back to this episode once you've finished. The other thing I want to share right from the beginning is that we're teaching a free workshop at the end of this month called What's Next? and it's going to be really good. We're going to be talking about the myth of certainty and what we can seek instead of certainty. So if that sounds up your alley, go ahead and RSVP, like I said, it's free. We'd love to have you there. Okay, well, let's get into the episode.

So when I was writing down some of my present reality, one of the things that I wrote down as an identifier and answer to the question, who are you was facilitator? And I chose to go with this one because I spend a lot of my time doing facilitation. Whether it's through Inner Workout and some of our corporate clients, or the work that I do with Google and Franklin Covey, I do so much facilitation. It was something I never dreamed of, something I didn't even know was like a job that you could do, something that you could get paid to do. And now it is a core part of my identity in this present reality. So what I started doing is just tracing my steps and thinking, okay, what got me here? What brought me to this moment where I strongly identify as a facilitator. And so I thought back, rewound the tape all the way back to childhood and I remembered wanting to be a teacher. I had a doll that was called Taylor the Teacher and she came with a book and different accessories and I was really excited about teaching people things. And facilitation, when done well, is really getting people to the point where they're teaching themselves and having those aha moments themselves. But I would argue that the best teachers are really gifted facilitators as well.

The next moment in time that I thought about was watching Legally Blonde. And I feel like I was probably a little young to be watching Legally Blonde, but I did watch it. And after that, I wanted to go to Harvard Law School, and I was really excited about the idea of being a lawyer. I would go to mock trial camp during the summer and my freshman year of high school I did mock trial. I loved crafting the questions, like seeing the overarching story, seeing our thesis, the argument that we wanted to make, and then creating a line of questioning to help leave the judge and the jury to that point. That's an aspect of facilitation again, and I didn't think about it that way.

And then I had another phase in childhood where I thought I wanted to be a Broadway performer. I was really enamored by the idea of being young Nala on Broadway. If you've ever seen the Lion King Show, and I just…everything I could get my hands on related to Broadway and musical theater, I was so interested in it. And I was interested in this idea of being a performer. At that point, I was also doing a lot of dance, a lot of ballet, and starting to dip my toes into doing acting and different things like that. But this idea of telling a story and getting people engaged in a story, as some type of performer was something that interested me at that time. Now, I don't think I could be an actress or a Broadway singer, my voice was never that amazing. But now that I don't really use it, I have a very limited range so I don't even know that it would be possible for me to be able to do that. But that performer side of me is something that gets to come out when I am doing facilitation, there is a moment where I want to bring people in deeper through a story.

And then as I got older, I realized there was a side of me that was really interested in having meetings work well because the time that I did spend in corporate, I just realized a lot of meetings were kind of waste of time. I was fortunate that I was in a leadership development program and I had an opportunity to take this course called Essential Facilitation that teaches you how to facilitate all different types of meetings. I remember we also brought someone in whose whole business was built around helping people have better meetings. And so there was the side of me that wanted more efficiency and wanting to be able to go to meetings and feel like I was getting something out of it. That helped me start building intentionally for the first time. And then I had an opportunity when I was at Allstate to learn how to facilitate their inclusive diversity workshop. That was one of the first times that I really stepped into the role of a facilitator and that was driven by my desire for impact. So my desire for efficiency helped me start building facilitation skills, and then my desire for impact is what led me to my first real facilitator opportunity.

And then, years later, when I saw an opportunity to start facilitating through Google, I did not identify at all as a facilitator. Then I started reading what was required and realized, oh, that's what I've been doing. I've been doing this in meetings and in workshops, and in different aspects of my job and this is like a skill…this is something that I could do. And now I get to do that work. We've traced all the way back to the present moment and now I get to do this work of facilitation and coaching and speaking which are all similar but have slightly different skill sets. And it started with this desire to be a teacher as a kid.

What I love about taking time to just think about a point in your present and how you got here is that it allows you to see this present moment as the culmination of a journey. And I know for me, when I looked back, I realized, there are some discoveries. There are some things I never considered as being part of my facilitator journey. I didn't think that my Legally Blonde…wanting to go to Harvard Law part of me phase of childhood, or my Broadway phase of childhood had anything to do with where I am today. And yet they did. And when you can look at your past that way in relationship to the present moment, you might feel called to do something. You might realize there's someone that I need to forgive, that someone might be you. You might have to have compassion for a past self who didn't have all the information that you have now. Maybe there's someone that you want to write a thank you note to. Maybe there's a theme, or a persistent question, or a passion that you again, didn't think was all related. But now you see, oh of course. That's why that makes sense. I'm always wanting to answer this question. For me, one of my persistent questions is how do people work and how do people work together?

And that one question, if I traced it, has had applications and things going all the way back to like middle school. So I want you to sit with this question, what brought you to this moment? And again, that present moment, make it really clear. You can drill down onto one aspect of your present reality. What brought you to this moment where you are a facilitator, or where you live in New Mexico, or where you are a software developer or where you're feeling restless? And maybe that was an emotion that you put down. And when you were answering how are you in the present reality, choose just one aspect and trace it back. Don't mine because I worked on this before I started recording, it came together in a pretty linear story. For you, it might just be bits and pieces where you're just writing down oh maybe that's related to being a software developer. Maybe that's part of what inspired me to move to New Mexico. You don't have to tie it with a pretty bow just yet. Just start answering the question what brought you to this moment, on one aspect of your present reality? Okay, I will let you get to reflecting and then we'll close it out on the other end.

Hope you got some good reflection and if there's anything that you feel called to share, we love it when you share on Instagram Stories. Or if you're in the group chat, feel free to start a conversation in the group chat. And the last question that I will encourage you to think about is okay, now that you know what's going on, what brought you here to your present moment? Think about if there's any action you need to take, based on what you saw in your past. I gave some examples. Maybe there's a moment of forgiveness or appreciation. Maybe a question that you need to invite yourself to explore and give that some thought over the next week. We're gonna round out this series by talking about the future. Thank you so much for your time and for your expertise. Take care! 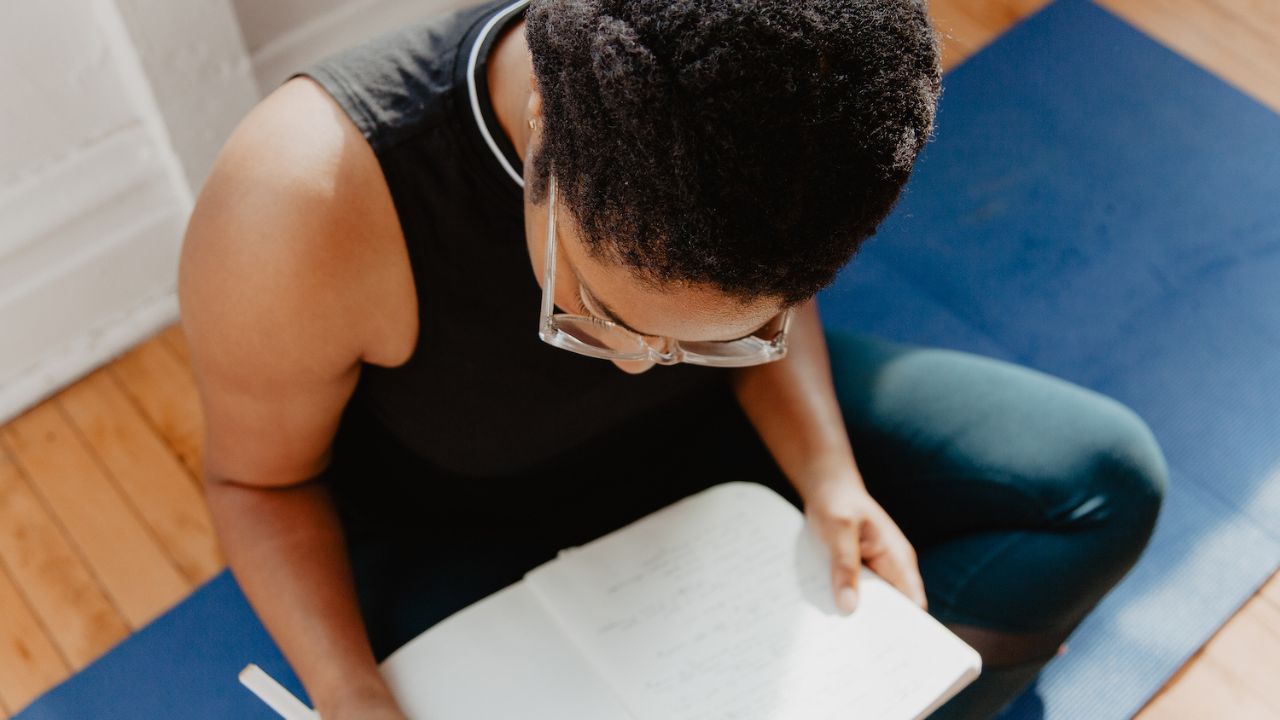