As a child, you were probably introduced to the word growth as it pertains to height, shoe size, or hair length. It was just a measure of what's changed physically. But as an adult, the conversation about growth usually touches on wellbeing, unlearning behaviors or stepping into a new role. Your definition of growth may look and sound a bit different from others - and that's okay. Understanding what growth means to you is your homework for today. (Oooo that rhymed!)

Ready to reflect? Of course you are!

Welcome back to Inner Warmup where your inner work begins. I'm Taylor Elyse Morrison, creator of Inner Workout and you, as always are our expert guest. Thanks for being here. The question that we're exploring today is what is growth? Which honestly, is more of a philosophical question than I normally do. It's funny, my husband on the enneagram, is an enneagram five. And if you're familiar with enneagrams, fives tend to like, live to think, they're very intellectual. And I'm an enneagram three, I'm pretty straightforward. I like very clear formulas, this is how it is. And he will often try and have these philosophical discussions with me. And I'm like, okay, but let's like, make it grounded in the real world right now. So calling back to last week's episode, it's a little surprising, I surprised myself a little bit that this is the question that I I landed on. But it's a question that I have needed to ask myself. And it's a question that I find myself wanting to present to other people. Because as kids, my experience, and I'm wondering if this is true for you, too, is that we have a lot of ways to look at growth, like from the time that you were born, all the way until slipped through puberty, there are certain growth metrics that you're supposed to hit, especially when you're younger, like, you should be getting this tall. If you're not growing up that rate, then they might be a little bit worried. Or, here's the range of times when we expect most kids to start speaking. And if they haven't grown to a point where they're speaking, that might be the time where we start to look at a specialist, or even growth in school, like, we start with addition. And then we level up eventually to multiplication and division, or growth. in terms of maturity. When you're a kid, the responsibilities that you are allowed to have are different than when you're a teenager, which are different than when you're in college, which is different than when you're postgrad maybe living on your own. We have these ideas of what it looks like to grow. And then once we're an adult, it's less clear what growth is supposed to look like. And what I found and you may have found this too, is that we just fill in the blanks with what we see. So in businesses, we see that we're supposed to have exponential growth, like your business is supposed to make more money every year, could be exponentially more money, you're supposed to have more money, more customers, more users, grow, grow, grow, more followers, whatever it is. That's the model that a lot of us have been presented with that in that you don't have to have a business for that to be true, it can be also true. I remember when I like worked at Allstate, and we were constantly thinking about the board and shareholders and were we providing the most value for them. There's this expectation, that value is continued growth. Then you might think of growth as milestones, like I know that I'm growing because I own a home, or because I have a partner. Or we've decided to have kids and we had a kid, or we got this promotion, and I'm getting a promotion every one and a half to two years. We can just equate growth, with milestones. And again, I see this in myself where I can feel behind because I don't feel like I'm growing at this arbitrary rate that I see other people growing at. I see this a lot with clients, the sense of, I'm feeling behind, and the people that I work with are incredible. Like these are the type of people who are doing the thing, whatever it is that their thing is, and they're great at what they do. They're great in how they show up in their personal life in many ways. But there's the sense of I should be doing more, I should be moving more quickly. I'm running out of time, which is so counterintuitive when we look at the growth that we actually see in nature. It's hard for me to think of something in nature that continues to just exponentially grow.

Sure, there are some things in nature that tend to grow quickly. But there are also, those are the things that tend to die more quickly too, like think about like gnats. They can grow up in a relatively short timeframe, but then they're dying relatively quickly too. And I think of that in juxtaposition to something like an oak tree. Like an oak tree goes from this little acorn and then it takes like 30, some things that I read could say even up to 40 years, to be a fully mature, like huge oak tree. That's a lot of time. That's time when there's like the root system is being developed, where it's starting to get different types, like the leaves in different places. It's like, there's so much happening in that 30 years. And I don't think oak trees are saying, "Oh, I'm so behind, I need to go more quickly." They know that they're growing. And on the timeline that they're supposed to, based on what is happening around them, based on where they've been planted, based on how the weather patterns are shifting in their environment. And I wonder what it would look like for us to get more clear on what growth means to us. No pun intended. But the next thing I actually want to share with you, I just realized this is a quote by James Clear, if you haven't read "Atomic Habits", it's a really great book, I probably should reread it again this summer. But he says if you get 1%, better each day for one year, you'll end up 37 times better by the time you're done. 37 times! And 1% Better is so small. Like I could see getting 1% better at meditating, or 1% better at being patient, or 1% better at facilitation, and still having that sense of feeling like I'm behind. But then when I reframe and say, Oh, this is my 1%, it's uncomfortable. It's not happening as quickly as I want. But this is my 1%. And if I just keep moving forward at whatever pace I'm able to, I'll continue to improve. I'll continue to grow in my gifts and my talents and in my impact. So that brings us back to the question that we have today. I've shared some of the models for growth that I've seen maybe that you've seen as well. But ultimately, it's up to you to decide, what do you want growth to mean for you? How are you going to know that you're on track? The two questions that I invite you to reflect on first, "What is the definition of growth that you're operating on?" And that was big for me to think, Oh, what am I operating on? Because I don't think I've ever sat down and defined growth. Sure I put metrics and things. But I haven't really sat down and said, This is what growth means. This is how I know that I am growing enough. And then from there, you can say okay, how do I want to define growth? So what's the definition of growth that you're operating with now? And how would you like to define it? Take a couple minutes reflecting on that. And I'll chat with you again on the other side.

Thank you so much for taking the time to reflect today. If anything came up that you want to share, feel free to shoot us a DM we love hearing from you. And also consider joining our group chat where we can have conversations in real time. Thanks as always for listening, and thanks for your expertise. 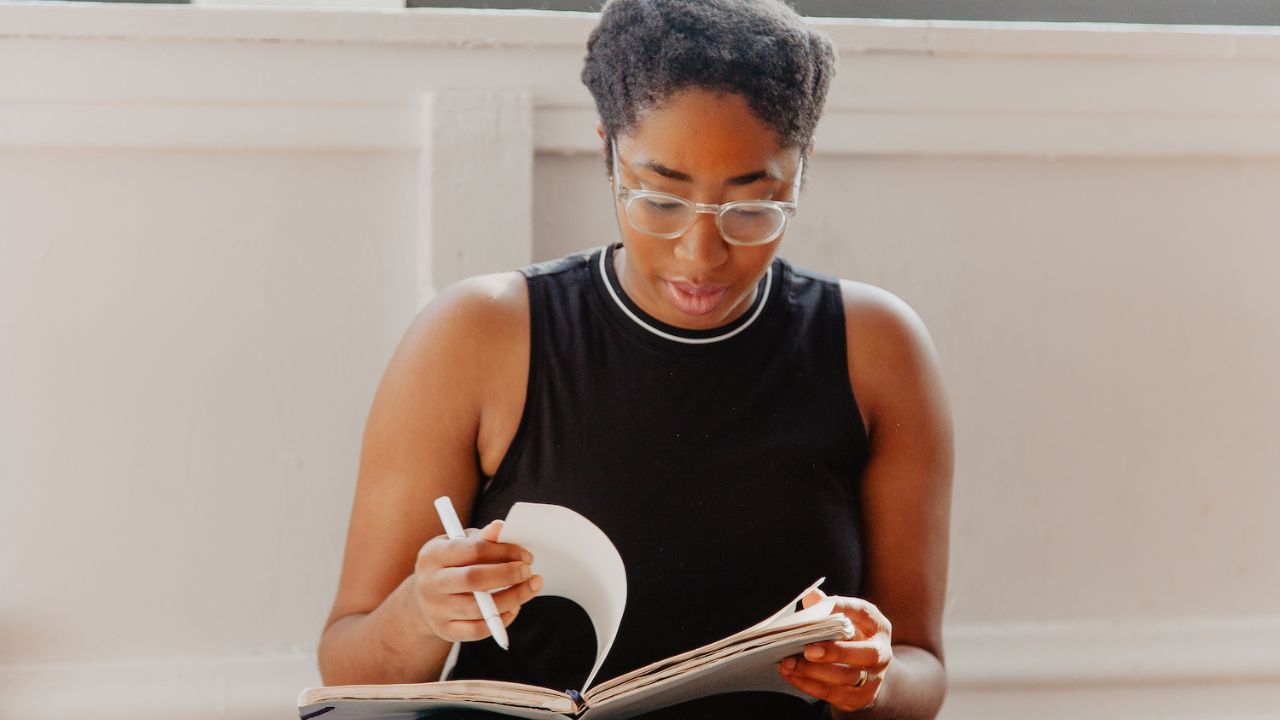