What's The Hardest Conversation You've Had?

On this episode, we take some time to reflect on the hard conversations we've been faced with in the past.

Mentioned in this episode:

Welcome back to Inner Warm up where your inner work begins. I'm Taylor Elyse Morrison, founder of Inner Workout, and you as always are our expert guest. Thank you for being here. For our little check in kick off activity, I just want to do something really simple that I actually did before I got started on this episode was just to close my eyes. So take a second, if it feels safe for you, just close your eyes, maybe you take a deep breath, give your eyes a little rest. And if you did close your eyes, go ahead and open them up.

So unrelated to the topic at hand, I realized my eyes were super dry, probably because I had been looking at my laptop a lot today. And so I took a few moments earlier today to just close my eyes and let some tears get in there, help with the dryness. Also not looking at a screen for 10 seconds and it was really lovely, so I hope you enjoyed that. And that's another little thing that you can incorporate into your day.

For the past several months, we've been looking at shifts. Last month, we were looking at kind of external or environmental shifts. And this month, we're rounding out that theme by looking at relational shifts. How have your relationships changed? For any of these prompts, you're always welcome to put your own timeframe on them. I'm going to be framing the ones over the next several weeks by looking at the pandemic, so kind of March 2020 to now. You do whatever you want, whatever piece of time/timeframe you want to look over. So the question that I'm going to pose to you today is what's the hardest conversation you've had? What's the hardest conversation that you've had?

I was thinking about this question and I definitely had plenty of hard conversations over the pandemic relationally as I've had to. I mean, I've lived in different places. I've lived with my in laws, I lived at home for a little bit, I’ve seen my parents a lot more. With everything that happened with regards to the uprisings, last summer, I had some really hard conversations. I also quit a role. I had an intern quit a role last summer, like they're lots of hard conversations with other people to be had. But when I thought about the hardest conversations, like the ones where I think about them now, and my body is kind of like hoof that yeah, that was a lot. They actually were conversations that I had with myself.

And there was a trend around them. I can think of at least three instances and if I sat with it for even longer, I could probably think of more, but I have this inner knowing. I knew that something needed to change and sometimes that was it, just the knowing that something needed to change. Other ways I knew exactly…there are other times when I knew exactly how it was supposed to change. But I wasn't taking that aligned action. And for those of you who have taken our free take care assessment, you know that the inner knowing and the aligned action, that all falls under the wisdom dimension. And when that dimension is out of whack for me, I feel it. There was this internal tension where I was taking steps down one path, whether it was with the business or with pieces of my identity or my personal life, I was taking a step down one path. And there is this whisper like hey, hey, you need to stop or you need to turn around or you need to chart a new path. And I was just like, oh, that's really nice of you to say, but we're good right here, we're just gonna keep going the way that it's supposed to go. And then over time, and for some of them, it was like a really short turnaround, and short, really was still like a month and a half. Some of them it was really short, some of them it was like months long of should I, shouldn’t I? Should I, shouldn’t I? And then eventually the discomfort of ignoring that knowing, that voice, that intuition, whatever you want to call it…that got bigger than the discomfort of having to look in the mirror and know that there were changes to be made. Because that's essentially what I was doing when I wasn't having that conversation with myself is I just, I knew I'd have to do something differently. Or maybe I'd have to give something up, that I put a lot of time and effort and energy into and I wasn't ready to do that.

So I kept going in the opposite direction. But after a while going in the opposite direction, while trying to drown out that voice that was getting progressively louder, it just got exhausting. And so I sat down, and I had a conversation with myself. And sometimes it is literally, for me, having a conversation where I will talk to myself and say “I am feeling overwhelmed. I'm feeling confused. I'm feeling sad. I'm feeling embarrassed. I'm feeling shame.” And I'll say that out loud. Other times, I'll pull out my journal and I'll have a conversation that way. And I might write down like, “how are you feeling?” and then I'll write down how am I feeling. Then I'll ask a follow up question, and I'll write it down. “Why are you feeling that way?” and sometimes I don't know. And I keep going and going until I get at the root of, okay. So, for example, one of the big decisions was letting go of my old podcast. And I was afraid because the podcast at the time was actually growing. And I was letting it go while it was growing. And I didn't know if I was making the right choice or the wrong choice, but I couldn't justify why I was doing it anymore. When I sat down to think about it, and write it out and have a conversation with myself in that way, it became really clear that it was time for me to let it go. And what I've learned through having difficult conversations with myself, literal conversations, journaling conversations, conversations that just take place in my head, all of those things, is that eventually my inner voice is always going to win out.

My inner voice is super wise. I feel very grateful to have my inner voice. And it's gonna get its way. It's just a question of, do I listen and lean in sooner rather than later?That's the choice that I'm making as I'm wrestling with decisions, as I'm avoiding having conversations with myself. And having gotten to do this reflection and sit with this prompt right now, what I'm wondering for me is, how can I make a smaller gap between hearing something and acting on it and in an aligned way? How can I make that easier for myself instead of having like this really long back and forth that ends up being really draining. And depending on what direction I'm walking in, what metaphorical direction I'm walking in, as I'm having this back and forth, it can be more work for me later, more effort for me later. And I just want things to feel easy and supportive in a long term way. Because it can feel easier to keep doing what you're doing but that's oftentimes a short term. And the long term ease is walking in alignment at least that's what my experience has been.

I feel super grateful to get to do these episodes and these interviews with you because I really sat here and thought and reflected and unlocked some knowledge about myself in getting to record this. And now I want to pose the question to you. I'll say for me I ended up in a place of it was conversations with myself that are the most difficult, that doesn't have to be true for you. There could be a conversation that you had with a loved one or with a stranger or with a partner, whatever that is, so don't let my story drown out whatever reflections that you need to unlock today. And with that, I will share the question with you: What is the hardest conversation that you've had?

‍
I appreciate you taking the time with me to reflect and to share. If you want to continue the conversation you can head over to our free community and if not, I will sit down with you next week. Thank you for your time and your expertise. Take care! 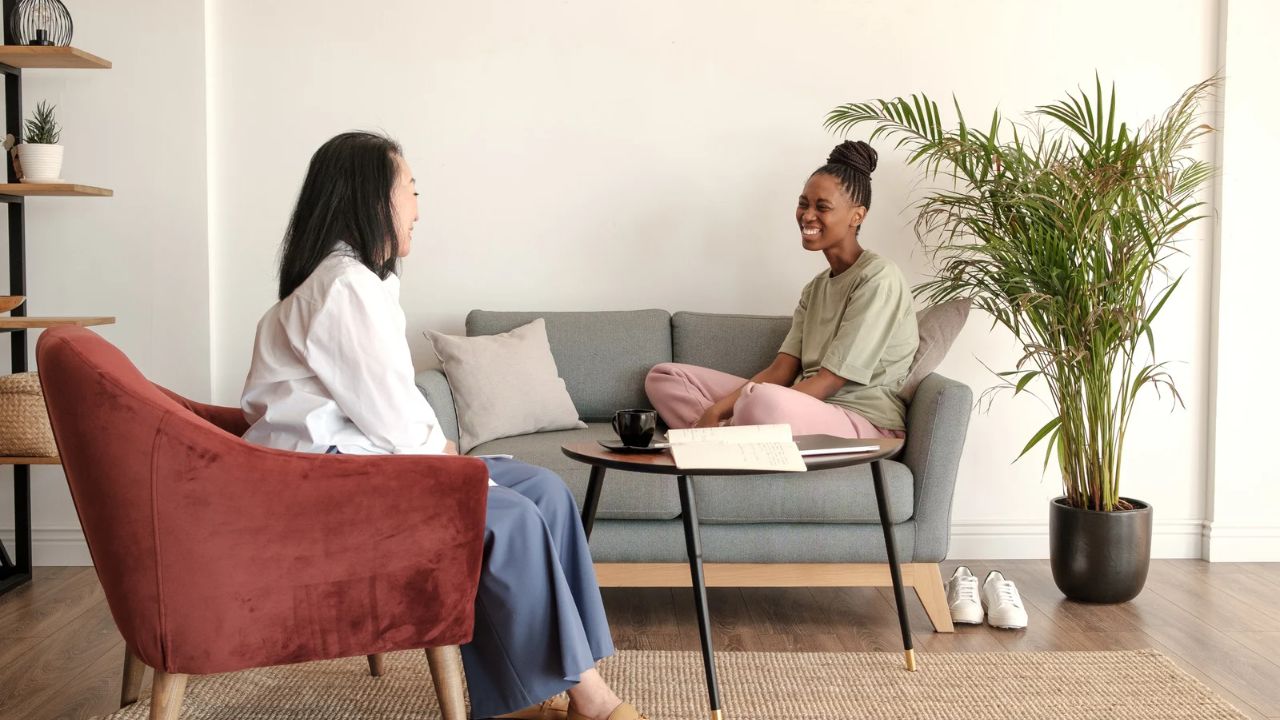 Your Guide to Finding a Therapist